Coming NEXT WEEK – Hub Chats, March 24 and 25 … FREE. Coffee and light snacks included. Sign up below.

Are you part of a SNAP group, Block Watch, Community Hub or interested in becoming one? We’re hosting get-togethers for Seattle neighbors to organize and plan together for disasters.

Join a Hub Chat
Hubs are Seattle neighborhood groups that work together to share information and help each other in a major emergency. Learn how hubs works, how to start one, available resources, and how SNAP and Block Watch fit in. Get a first-hand look at a new tool that allows you to see and share your group’s information. It’s all in preparation for …

The April 17-18 “Hub-a-thon”… make your mark on a map during a virtual meet up of neighborhood SNAP groups, Block Watches and Hubs! Find out where other groups are and how to contact them.

Open to all individuals, agencies, neighbors and residents interested in helping each other during disaster.

To learn more about SNAP and Community Emergency Hubs, go to: http://www.seattle.gov/emergency-management/working-together/community-emergency-hubs

For more about Block Watch, go to: http://www.seattle.gov/police/blockwatch/default.htm

RESERVE YOUR SNAP TIME NOW FOR A FREE PROGRAM IN MARCH, APRIL OR MAY!
The Seattle Office of Emergency Management is taking reservations to have the SNAP (Seattle Neighborhoods Actively Prepare) program presented right in your living room! Invite a dozen or more of your closest neighbors together and reserve your time for an evening or weekend class, beginning in March. We cover all the emergency essentials, from safe actions to coordinating with others. Classes last about an hour and are taught by trained volunteers.
To schedule a program, please email us at: SNAP@seattle.gov. Provide your name, contact info and preferred date and time in March, April or May. Please allow three weeks’ notice, and we’ll make sure you have everything you need to host a successful SNAP party! For more information, email us at SNAP@seattle.gov.
OVERVIEW:
For 2014, the Seattle Office of Emergency Management will offer a series of short, skills-based workshops in partnership with Seattle Public Libraries. Each 30-minute workshop will focus on one aspect of preparedness. The same workshop will be offered geographically throughout the city four times each month – one North, one Central, one South, and one lunch program at the Central Library.
Posted by Ballard Prepares at 1:41 PM No comments:

An Amateur Radio License is a great asset for you, your family and your community. In case of a disaster, many times, telephone lines (both land and cellular) become overloaded or non-functional.

We are starting a Amateur Radio Club here and already have our Club Radio Studio. We have a
few radio rigs and will be mounting antenna’s on the roof. We anticipate putting together a repeater for the purpose of emergency communications for neighborhood HUB’s to communicate during an emergency. Please join us.


Training Class for the Tech License,


The course and test are FREE. Space is limited. Reserve ahead and early. Optional study materials can be purchased (details below). 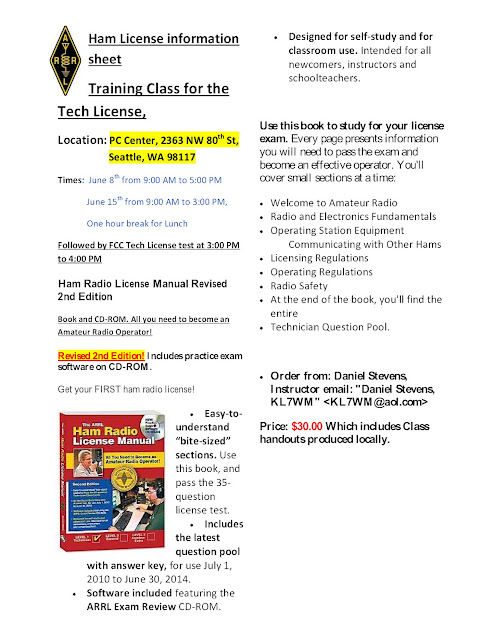 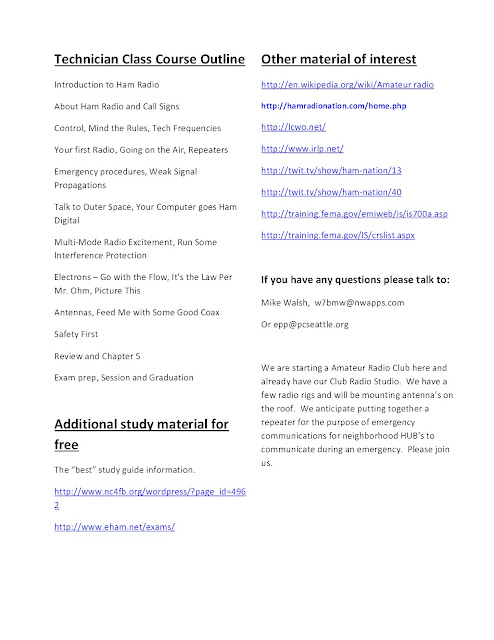 Ballard and Crown Hill have proposed a total of six emergency preparedness hubs. Two of those hubs will be participating in Saturday's exercise. Show up, or call ahead if you are interested in participating:

Other Ballard / Crown Hill Hubs not participating this time:


Neighborhood emergency preparedness groups across Seattle assisted by two amateur radio emergency communications teams will test their skills Saturday in an exercise based on a simulated catastrophic earthquake.  This exercise titled Mayday, Mayday is the spring version of this semiannual event.    The goal of this exercise is to practice preparedness and response actions that will contribute to community resiliency in surviving a significant disaster.
An estimated 125 people from disaster preparedness groups and volunteer response teams including the Public Health Reserve Corps and  ham radio emergency communications teams will participate in the event.  The amateur radio teams are sponsored and trained by the Seattle Office of Emergency Management.  Their purpose is to provide emergency communications when cell and landline phones become overloaded or damaged due to catastrophic events.

The scenario for the event is based on the impact of the 6.3 magnitude, 2011 Christchurch earthquake in New Zealand applied to the Seattle area.  That disaster took the lives of 185 people and severely damaged the central city buildings and infrastructure as well as causing massive destruction to its suburbs.

“In a real event, information communicated by ham radio from the Hubs could be used by City response planners to help assess conditions throughout the city and develop response plans”, said Cindi Barker, a member of the design team for the exercise. Exercise designers have built in some twists and turns involving communications networks and several challenging issues at Hub sites which will develop during the three hour training event.

These exercises provide an opportunity for preparedness new-comers to work alongside their more experienced neighbors to gain experience and learn skills.  “It’s all about neighbors helping neighbors” said Carl Leon, one of the drill organizers.  “We set up neighborhood Hubs where people can come to get information and share resources or skills to help those that have been affected”.

Seattle Auxiliary Communication Services (ACS) amateur radio teams will set up portable, battery powered radio networks at neighborhood Hub sites providing communication links with the City and to other Hubs.  Messages will be transmitted on ham radio systems using both voice and digital formats.  Computers are connected to send and receive e-mail like documents.

The second participating ham Radio group is the Western Washington Medical Service Team (MST).  Its purposes are to provide emergency communications to and from area hospitals and medical facilities in the Seattle area, as well as coordination with the City EOC regarding hospital readiness during this drill.

The Public Health Reserve Corps of Seattle and King County will be participating for the first time, offering both ham operators and medical professionals at the Hubs. “Our goal is not to set up medical care, but to learn how the community connections are made and where we can fit in during a disaster. Our priority is to help stabilize people and move them into the established medical system”, said program manager Dave Nichols of Public Health.

Posted by Ballard Prepares at 11:31 AM No comments:

The Seattle Office of Emergency Management is taking applications for the Winter CERT Training Course.

About CERT
Following a major disaster, emergency services that people have come to rely on will be overwhelmed and unable to meet the increased demand.  The Community Emergency Response Team (CERT) Training is a series of courses that are intended to prepare people to take action in the immediate aftermath of a disaster.  The training is a combination of skills based classes that will teach participants about Fire Suppression, Utility Control, Light Search and Rescue and Disaster First Aid, in addition to basic tenants of Emergency Preparedness and Emergency Response.

Because CERT training is designed so each class builds on the previous one, it is important that participants be available to attend all of the classes.  The schedule for the Winter CERT class is as follows.

The CERT class is filled on a first come first serve basis.  We will establish a waiting list that will be used ONLY for the winter class.  To register please send your request to SNAP@seattle.gov .  If you have questions please contact Cathy Wenderoth at cathy.wenderoth@seattle.gov or 233-5096.  To learn more about the CERT program you can visit their website at http://www.citizencorps.gov/cert/about.shtm.

On Saturday, Jan 26th, 2013 more than 70 folk gathered in the Seattle Gilbert and Sullivan Society's practice space at Crown Hill Center to complete their American Heart Association First Aid and CPR certifications. Everybody passed which means that Ballard, Crown Hill and points in between now have 70 plus more people trained in First Aid and CPR. The training was provided through a Seattle Department of Neighborhoods NMF Small and Simple Fund grant. We worked with the Seattle Office of Emergency Management to get the grant. Training was provided by Prevention MD, and included two short online courses plus 5 hours hands-on practice with a great group of instructors.

Thanks to everybody who participated and gave the time to make our communities safer and more prepared for the next big disaster.

Making the most of your Hub


Posted by Ballard Prepares at 2:40 PM No comments: